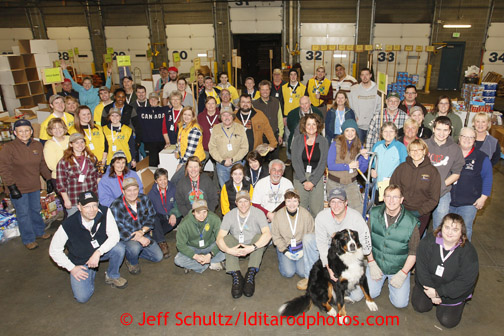 Yet another day of volunteers and sponsors working tirelessly to make the 2013 Iditarod happen at Airland transport in Anchorage. Airland was taken over by 60+ volunteers, led by Pat Owens where they sorted and re-packed food and supplies for the volunteers working at each of the checkpoints. The Airland employees shrunk their operations down and worked around the Iditarod folks to make it all work. Friday, February 15, 2013. A stack of “people food” and supplies heading to the Shaktoolik checkpoint awaits packing into boxes at Airland Transport in Anchorage during the people food drop day. Friday, February 15, 2013. Volunteers Pat Hanson (L) and Sister Marissa Hedelius (from the LDS church Helping Hands Ministry) count forks to be sent out to the 22 checkpoints along the Iditarod trail at Airland Transport in Anchorage.

The volunteers sorted, counted and packed everything from plastic forks, canned tuna, hotdog buns, cookies, hot chocolate, coffee, bathroom tissue, soup and much, much more. The Iditarod airforce will begin flying these supplies and the straw, HEET, lathe and musher’s food drop bags to some of the checkpoints beginning tomorrow…weather permitting.
Look for more as time goes on.
Jeff Friday, February 15, 2013. Some 60+ Iditarod volunteers pose for a group photo during the “people food” drop at Airland Transport in Anchorage. Each of the 22 checkpoints gets an assortment of food to be eaten by the checkpoint volunteers such as checkers, veterinarians, pilots, communications people and more.