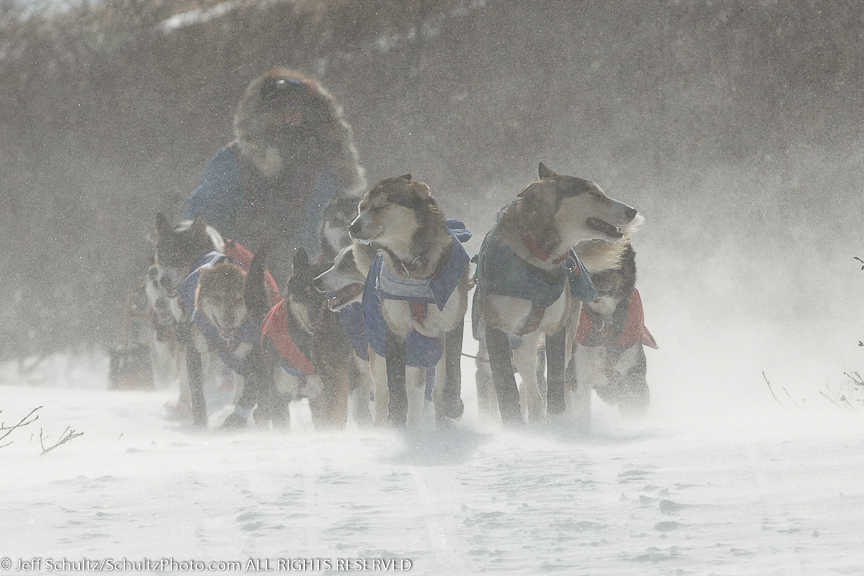 The 2015 Iditarod was an interesting race and photo shoot opportunity for me. The good trail conditions combined with the amount of teams entered (78) made for a shooting frenzy for me each day. The first couple days saw dog teams arriving and leaving one after another at the checkpoints and on the trail between. That made me want to shoot more and more— which I did. But shooting more and more really means LOTS more work on the image editing and processing side. Looking back at the 1500 or so images that I kept from this year, I’m quite happy with the outcome. Here are a couple of my very most favorite images from this year.

It was a VERY wet Anchorage ceremonial start— it was raining in the early morning. I found a place with lots of water and just happened to be there when Mike Santos handler, Mollie Donohue-Meyer, took a spill into a puddle along the bike/ski trail. Flying along the Yukon River from Tanana to Ruby (120 mile stretch of trail) we found where the trail transected a portion of the river that had ice chunks covered by fresh snow.  We circled around for a while (traveling at 100 mph) and waited for a team (traveling at 8 mph) to make it into the area and then we flew right over the team and I framed the image. As usual when I’m in Unalakleet, I borrowed a snowmachine from my friends, the Eckenweiler’s. I ran out on both the incoming and outgoing trail several times as teams were coming in and going. Shot at sunset, sunrise and many parts of the day. On one run out the trail when it was blowing some 20 mph, I passed Michelle Phillips on some glare ice and stopped to photograph her as she went by. I passed her again and not far from there, the wind had blown in the trail. Seeing this, and knowing Michelle’s dogs would need to run through this fresh, wind-blown snow, I drove around the trail and stopped on the far side and waited again for Michelle and team to break the trail in the wind.