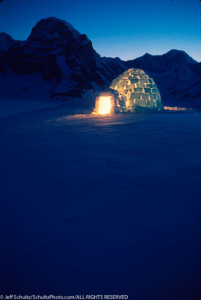 The year was the film days. I hired a mountain climbing friend Marc Phillips to take me into the Ruth Glacier in May specifically for this picture. He knew how to make an igloo and he had me cut ice blocks, while he stacked them. We made sure to not trample the snow around the building site. I asked him to make two entrances on it so that I could shoot it from two different angles. Once it was done, he began to “chink” it, by putting snow in the cracks to stop the airflow. I asked him to not do that, so that it would keep the look of the blocks. I got up early, before sunrise, lit and placed a gas-powered Coleman lantern in it and began shooting. I was pleased with the outcome and the image turned out to be a huge commercial success, selling more than 100 times. I imagine this was shot on Kodachrome film. Those were the days!!