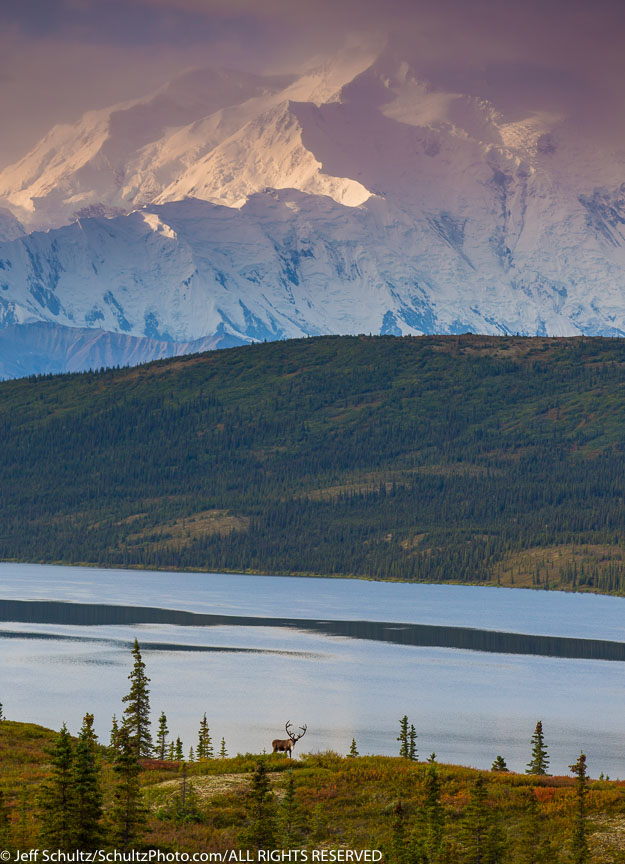 Pre-visualizing an image before it happens is a large part of a successful photo shoot, such as in this case. This image was taken during my 2014 Denali Photo Tour and Workshop. The group of us watched and photographed this caribou for 20 or so minutes as it was feeding and walking around on the tundra. Then it stopped and lay down to rest. After seeing it lay down with a tundra background I told the group, “OK, at some point it will get up and we will want to be in a position so that when it does get up, we will have the mountain in the background and it will be set against the water of Wonder Lake in order to accentuate the animal.” So, we hiked down the hill we were on and sideways until we had the mountain in the back and could just barely see its antlers. We all had our long lenses on tripods and we waited and waited. Sure enough, some time later he stands up and this was the reward. I think having that separation of the caribou against the water made a huge difference on the impact. For me, it was just what I was looking for.

I am happy to announce what I consider the ultimate in Alaska Photo Tours and Workshops in conjunction with my Swiss friends at Amazing Views Photo & Adventure Tours. I am their lead guide for what I’m calling the Alaska Odyssey Photo Tour. It’s a 14-day trip and we go to some amazing places, including 4 days at Camp Denali at the end of the park road in Denali National Park where we have a potential view of the mountain all day long and make images like this one.

Read about the tour HERE.