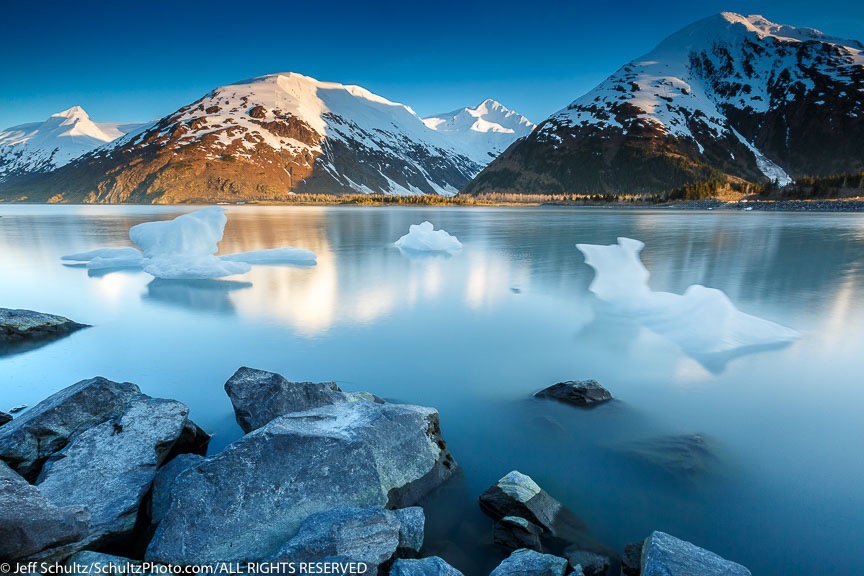 I was recently out looking for and shooting some spring landscapes. I found myself 50 miles south of home at Portage Lake, hoping that there might be some icebergs in the lake–and sure enough, there was. The light was nice and low and the icebergs were close to shore. I hiked down to the lake and began as I usually do, handholding the camera and composing images BEFORE putting the camera on the tripod— which slows down my creativity composition exponentially. After shooting a number of frames, both vertically and horizontally, from high and low and different areas, I settled on a vertical shot. Because of the water, I wanted to do an extra-slow shutter speed to make the water more silky and interesting rather than stopping it, which to me would make a more boring image. Having set up the tripod, figuring out the hyperfocal distance and the long exposure time, I made the image. On first blush on the screen it looked GREAT. But as I magnified the image on the screen, I saw that the icebergs had moved MUCH more than I thought they would and than could see with my naked eye. I now saw that they were actually floating, very slowly, from right to left, moving every so slightly out of the frame. I quickly did some recalculating and shot a few more frames, at much faster, but still somewhat slower shutter speeds, hoping to get a good image out of pure luck that would work. As the bergs moved, I had to as well. I moved down the lake shore and recomposed an image in horizontally and set up the tripod in a hurry. So much for a relaxed landscape shooting experience. I did the same thing here, using several different shutter speeds where I hoped to get the ice bergs still, but the water moving to give a somewhat silky look. I shot these scenes for a good 40 minutes, attempting everything I could think of. Here’s the trial and error results. All of these images are shot with a Canon 5D Mark III and a 16-35mm f4 lens.

Here is the first experiment I did. Shot at 20mm f18 ISO 200 for 2 minutes with a 10-stop Neutral Density filter AND a 3-stop hard edge Singh-Ray Galen Rowel graduated Neutral Density filter. WAY too long of an exposure to keep the icebergs very still at all. Though it does show motion. Might be something … but I thought it was too blurry to be any good. For one of the next shots I made, I used a shorter shutter speed. 1/13th of a second, ISO 500 at 16mm f20 with the 3-stop hard edge Singh-Ray Galen Rowel graduated Neutral Density filter. The icebergs are sharp and I like the composition somewhat, though the cut-off mountain on the right bothers me. Still I thought something was missing. The water is TOO normal and stationary. The last shot I did I think was better.  I used a longer shutter speed. 6 seconds, ISO 500 at 16mm f20 with a 5-stop Neutral Density filter and the 3-stop hard edge Singh-Ray Galen Rowel graduated Neutral Density filter. The icebergs are not tack sharp but I like the motion of the water and I like composition better without the cut-off mountain on the right.