“Manley” The Story of the Embarrassed Moose 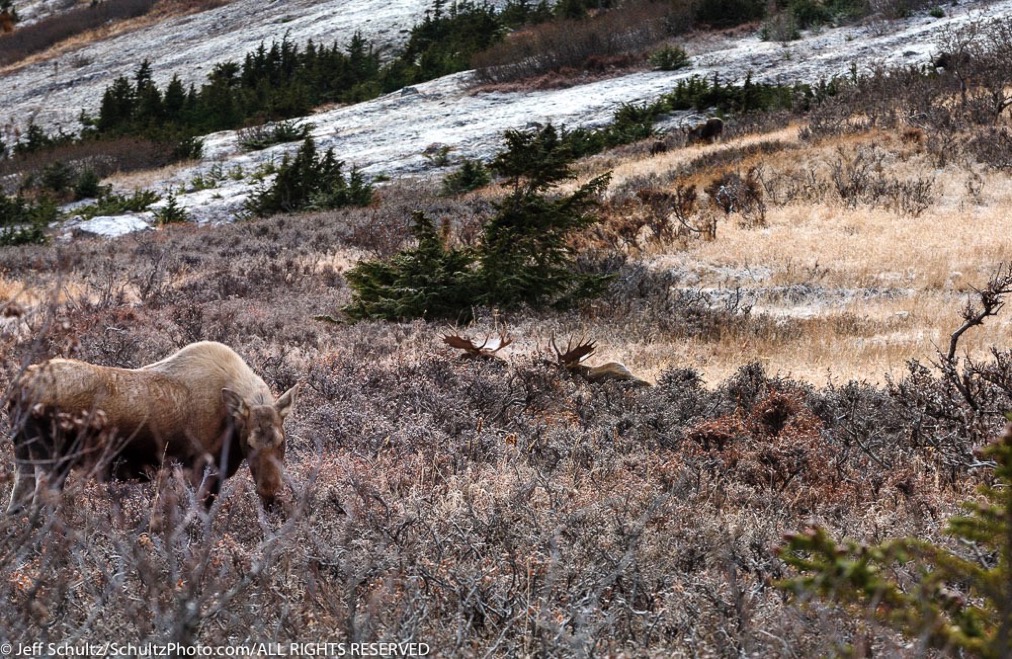 How many moose are in this photo?  Look closely, even at the small black dots.  Six is the answer.

As I was making images of many moose, they were slowly walking around and browsing on the brush as they went. They did not go too far, too fast. There were 11 within sight of my position. I had two cameras out, one on a tripod. I made my way toward the moose, VERY slowly, always within plain sight of them. As he and two other bulls (one with a much larger rack which I called “Manley” (LEFT) and one with a smaller rack, which I called “Puney” (MIDDLE) got close together I thought I heard Puney say something to Manley about how silly One-Off (RIGHT) looked with just one antler and then he quickly sauntered away. I felt badly for One-Off as he was being made fun of. And then I saw One-Off walk up real close to Manley. Seemed like they knew each other. It was now after the fall rut, so I’m thinking they had an encounter before and knew each other from that. I”m pretty sure I heard One-Off whisper to Manley that indeed he was embarrassed and felt real silly with only one antler. The other had shed on its own a few days earlier. Plus he seemed to walk in circles more as the weight of the one rack made him lopsided.

And One-Off asked Manley for a favor. “Would you mind giving this one rack of mine a few shoves and see if we can get it off me now so I can at least look normal?”  Manley agreed and said “Let’s see what we can do”. One-Off, not wanting to create a scene looked around to see if anyone was looking. He did not want to take any chances so he asked Manley to move into some bushes to be hidden. they went behind some brush to get some privacy and they worked together to loosen the rack. Kinda like when I’ve had a loose tooth, they tried a lot of various moves— in an out — back and forth. Manley was working real hard, shaking is full rack on One-Off’s single rack in order to make One-Off feel more comfortable. They kept this up for many minutes trying everything they could think of. One-Off then told Manley  “OK, let’s try this. Hold firm, I’m gonna twist my head a bunch and twist this thing off”. Nothing happened. One-Off finally gave up, thanked Manley for his help and then walked off, hoping no one was there to make fun of him. My hat is off to Manley for being willing to help One-Off, and I’m proud of One-Off, as a man, for admitting he needed help.

And here’s a very short video of the valiant effort they both made: