Print of the Month: November 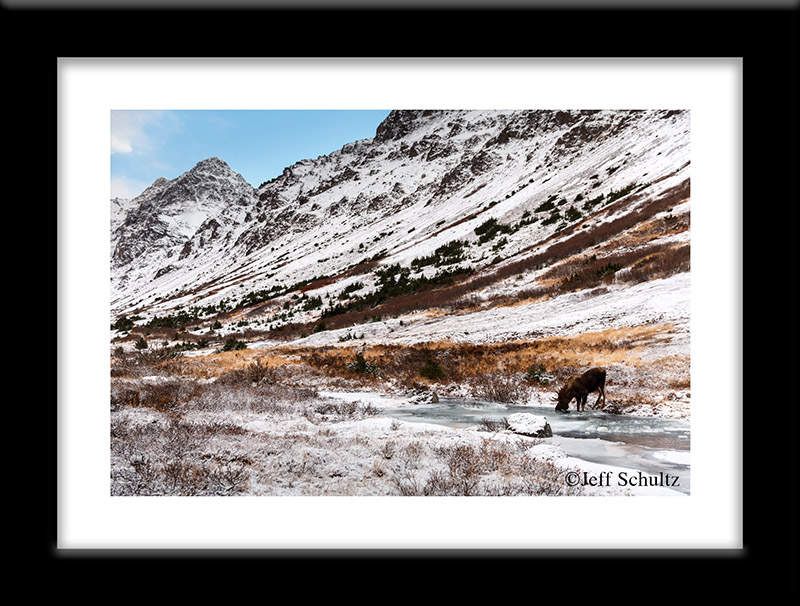 Recently my wife Joan and I went for a fat-tire bike ride in the Chugach State Park, just a 15-minute drive from our home in Anchorage. After about 1 1/2 miles we spotted our first moose. Then another, and another.  We stood and watched them feeding on short willow brush. We continued our ride until we came to a stream. We left our bikes and hiked a little further to the stream and saw that the water was beginning to freeze. There was fresh snow on the willows and the water looked aqua in color. I shot a couple images. One shown here. I was just plain THRILLED with what the area looked like. I told Joan, “I’d give just about anything if a big bull moose would walk  into this frame with the creek, mountains and snow-covered willows.”  Joan encouraged me by saying “Well, the moose have to drink too, eventually they’ll come down and drink.”  I thought to myself…”OH SURE.. I agreed, but what are the chances of that happening!?” We left the stream and began to hike further.  We did not get far and found a big bull sitting down and just 50 feet off the trail, above us, looking down watching as we went by. After hiking another 100 yards or so, THERE IT WAS, just what I was asking for back at the creek. We spotted a bull and a cow moose very close to the creek. I wanted to go off-trail and get some images like I had envisioned just a few minutes earlier. Joan was going to wait and watch. I took about 10 steps, saw a second bull and looked back at Joan with three fingers up. I walked just a bit more and there were TWO MORE bulls even closer to the creek. 4 bulls and a cow in all. I walked slowly over the tundra and through the willows, allowing the moose to get used to me. I slowly crossed the partially frozen creek, on the ice. The moose were just fine with me present, they just continued eating. After shooting a few frames, one of the bulls sure enough came all the way down to the creek. I was not sure what he was going to do. He knocked his hoof on the ice, testing it for how strong it was. He took another step and then what?  Yes, he bent over and began to drink. He must have drank for 2-3 full minutes. I was able to move to several locations to photograph him. This “print of the month” is my favorite of the ones I shot. It’s just MY type of image, showing the animal in its natural habitat, doing what moose do.  And Joan and I actually got to SEE IT !!  I was thrilled. I hope you enjoy !
Jeff
Share
Share on FacebookShare on Facebook TweetShare on Twitter Pin itShare on Pinterest Share on LinkedInShare on LinkedIn Share on WhatsAppShare on WhatsApp