HOW THE IMAGE WAS MADE: Winter Highway 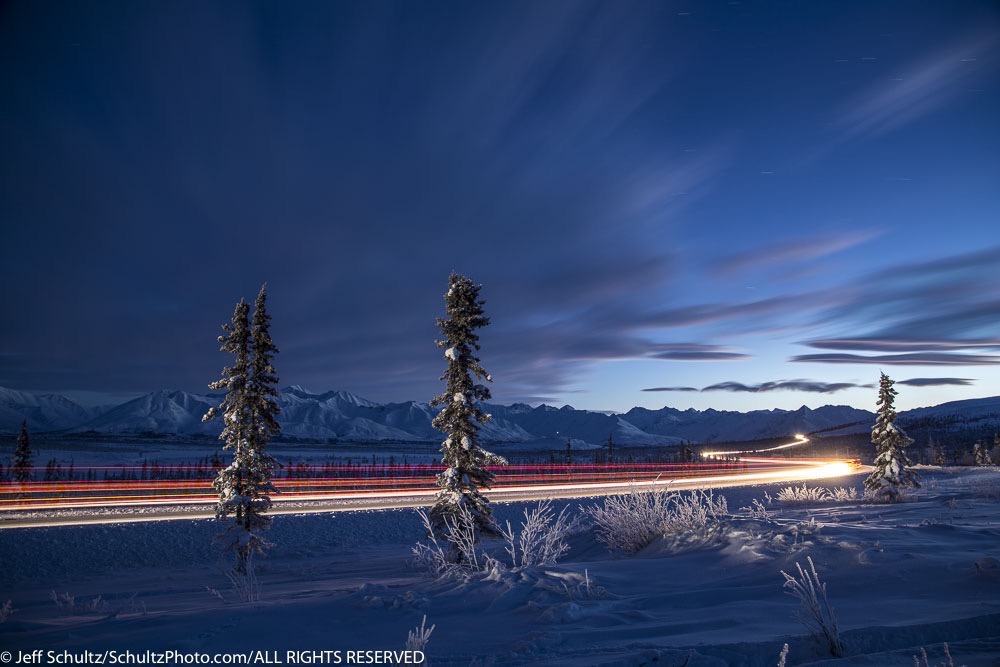 This image was taken in January of 2016 while out shooting in the “Glacier View Area” a 2 1/2 hour drive northeast of Anchorage. I visualized making an image like this before making the trip. The idea was to make an image of a winter mountain and snow landscape with head and/or tail lights on the highway. During daylight hours I scouted for this scene (and other night-sky vantage points). It’s always best to scout locations ahead of time, during daylight in order to actually see the foreground, find a safe parking place and confirm there are no obstacles that won’t work … like power lines that are very difficult to see at night. I just did not know where I would make it or how it would turn out. I”m very happy with the results.  Here’s the method I used to make this image work.

First, I had to determine just how long the exposure needed to be in order to have the car lights streak the entire length of the highway. To do that, I waited until headlamps appeared in the far distance, just cresting the hill. I hit the stopwatch on my smart-phone.  It took that vehicle 2 minutes and 15 seconds to make the trip. So, I determined that I would make an exposure of 3 minutes in order to be on the safe side, in case another vehicle took a longer time.

The first image I made was just to determine the exposure for the ambient light, not the car lights. There was no car passing at the time. I used “Aperture priority” metering at a “+ 1 stop”,  f4, ISO 400, which yielded an exposure of 15 seconds.  A careful check of the histogram showed that this was, indeed, a good exposure. The highlights were not clipped on the right and the shadows were not blocked up on the left. Like this:

It does not always happen that way and if the histogram was not correct, I would have adjusted the “exposure compensation” to the PLUS or MINUS side, depending on which way the histogram needed to move.

Knowing that this exposure was correct, I then manually calculated, on my fingers, what I would need to get a 3 minute exposure. I did this first by taking the current 15 second exposure and doubling it until I reached 3 minutes. Which in this case was as follows:

Knowing that I was going to use 3 minutes of exposure I then needed to adjust either the current aperture of  f 8 OR the current ISO of 400 by 3 1/2 stops of LESS light.  I then first changed the ISO setting because, ideally, I want to shoot at the lowest ISO I can get in order to have an image with the least amount of noise. So, the math on changing the ISO went like this:

I made many exposures of this scene in order to get variations on the light streaks as I changed the focal length of the lens in order to get some variety.  All the while, the light was getting less and less. As the light got less, I increased the exposure time to compensate and reviewed the histogram. Some vehicles had too bright of lights, some vehicles were only going away from me, some were big & tall trucks with high lights. The image above is my favorite, as there just happened to be a vehicle with bright lights that lit up the trees and some snow and frosted willows in the foreground very well. A little serendipity goes a long way in photography. Below are few that were good, but I did not like as much as the above.