How to make stunning photos of Denali from a plane 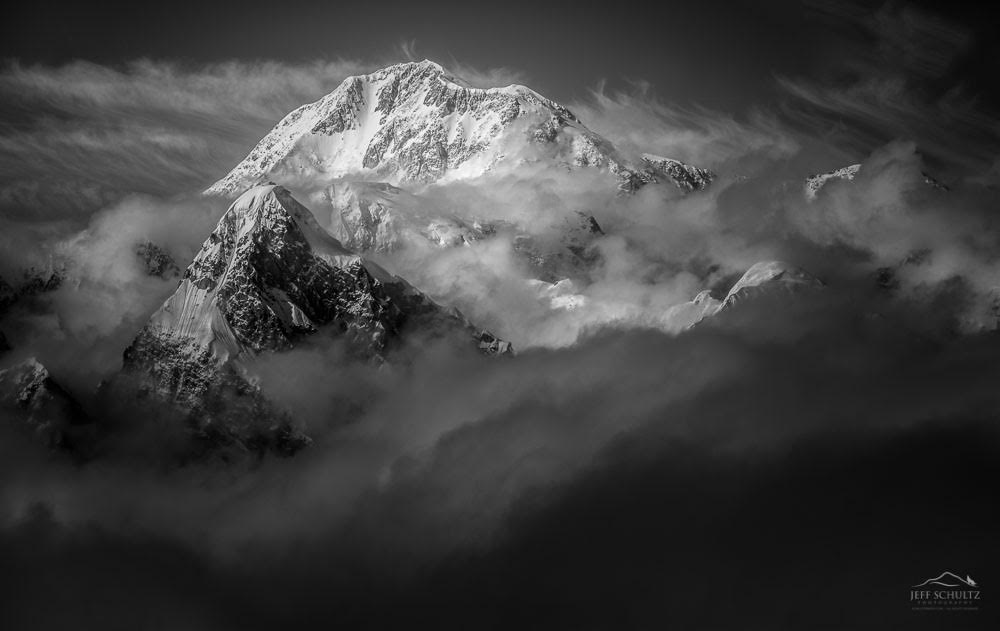 The Denali National Park flight seeing tour is probably the most requested Alaska experience that comes to mind when folks are inquiring about what to do in Alaska. There are several air-taxis that offer regular flights to Denali the more affordable of which are those leaving from the small hamlet of Talkeetna, Alaska.

Flying in Alaska is like driving in many other states

It’s the only way to get to many locations; including many of the towns and villages I travel to as a photographer. Though I’m not a pilot, I’ve flown a LOT in my 40+ years here in Alaska. Getting anywhere remote typically involves flying in a bush plane. Needless to say, be sure to fly with a reputable pilot and/or air-taxi company. Here’s a few that come to mind:

How to make spectacular images from inside a moving plane

In perfect world one would be able to open the window to make aerial images; however when traveling in a bush plane in Alaska your often forced to shoot through a plexiglas window that doesn’t open. With that in mind here’s a few tips from a pro whose captured a number of stunning images from bush planes in Alaska.

Confirm you get the window seat: Ask the air-taxi before you book that they have a window you can open to shoot from.  If not, then at least be sure they have “flat” windows you can shoot through and not the “bubble type” windows.  Bubble windows are made convex so that their is just a bit more room in the plane cabin. The problem with them is because they are curved, they distort the image greatly. Rarely will an image shot through a bubble window be of a sharpness that can be reproduced very large.

Minimize reflections: If you’re forced to shoot through the plexiglas, one of the biggest problems is getting reflections in the window from what is behind you. It’s very easy to overlook these reflections with your attention being focused on your subject out the window. Be very conscientious when you’re composing and look real close on the edges and corners for any off-color, off-cast or something brighter than it should be. Ways to help avoid reflections are:

Ask the pilot:
If you’re on a regular scheduled flight seeing trip where the pilot has a fixed route; ask the pilot which side of the plane to be on for best views. To know this, ask the pilot or air-taxi people before boarding, and with a map in front of you, which direction the flight is likely to take. Then, looking at the map, you can tell which side might be the best for this particular trip depending on where Denali or other top priority subjects will be. This will tell you what side to be on. Likewise ask them what altitude the plane is likely to be at while flying and compare it to the elevations of the mountains on the map. On the flight seeing trips in Denali, there are many times when the plane is very close to the mountains and the peaks are quite high above you.

Camera settings for Aerial photography while in the air:

A few years back, I guided a custom photo tour trip up to Denali where we had some incredible cloud formations like the ones in the image below. 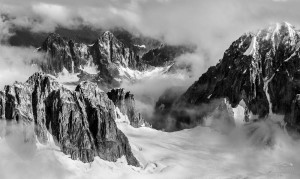 These cloud formations add dimension and drama to an image. To capture these kind of images requires knowing what the weather is doing and chartering with a pilot who has flown the Alaska Range for decades. This really pays off because you combine an experienced pilot with me in the back seat guiding and giving suggestions to my clients and the pilot for unique vantage points for stunning views of the Alaska Range peaks.

I’ve personally worked with Sheldon Air Service in Talkeetna to reserve their Cessna 185 so that a custom photo tour client could open the window and get crisp sharp aerials without what is typically scratched or dirty plexiglas in the way.

I conclusion while not ideal, aerial images shot through plexiglass can be almost as crisp and clear as an open window. I personally guide Alaska Photo Tours throughout the year where you can advance your photography skills.