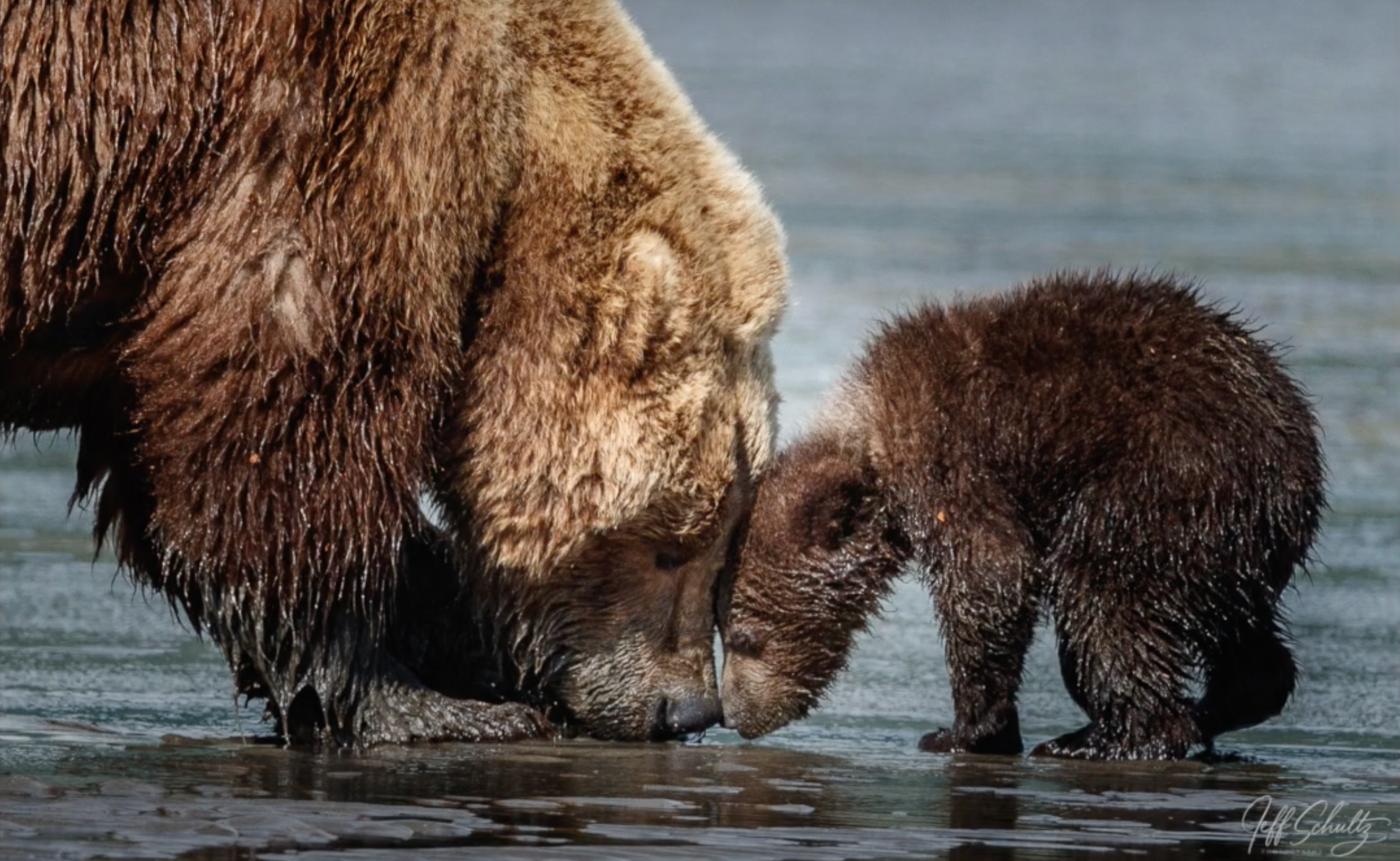 ALASKA BROWN & GRIZZLY BEARS:
Where to Find them & What to Bring

Many people love photographing bears. Especially the Alaska grizzly bear or Brown bear. It seems the quintessential photograph to have is of an Alaska bear catching a salmon.

And this particular type of photo below is the one that started that trend and is now the Holy Grail of Alaska bear photos.  The original that started it all was made 30+ years ago at Brooks falls in Katmai National Park many years ago. It’s still one of the most sought-after images. 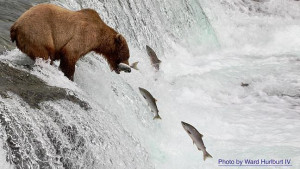 Alaska grizzly bears and brown bears are the same species but there are big differences between the two as far as their looks and such. Kodiak Island bears are indeed classified as a distinct species of their own.

The grizzly bear (BELOW) is typically found in the Interior and Northern Alaska. 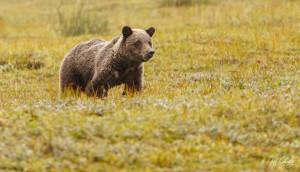 And it feeds off of meat (caribou, moose, Dall sheep, squirrels) and of course berries of all kinds. It’s smaller than its cousin the Brown Bear. 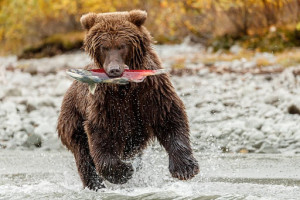 Brown bears are typically much larger than grizzly bears and make their home along the southern and western coastlines and inland of the coasts of Alaska.  Their main diet is salmon, an occasional animal-like moose, and of course lots of berries.

Where to Find and Photograph Alaska Bears

Finding and photographing the interior grizzly bear is not an easy task. They are loaner animals and cover a wide range of ground and do not congregate in specific locations, at specific times, or in large numbers like the Brown bear does. The best opportunities to photograph the interior grizzly bear is on the open tundra in places such as Denali National Park, along the Denali highway, and along the Dalton highway beginning in Fairbanks and going to the North slope. There are not really good photo tours or outfitters that can readily offer a person an opportunity to photograph the grizzly bear with any guarantee of success. Getting images of the grizzly bear is more of an opportunistic type of thing. When one crosses your path, be ready to photograph.

Photographing Brown bears and Kodiak bears is another matter. There are a number of photo tours, even day tours, that can give a person an opportunity to photograph brown bears because, unlike the grizzly bear, they do congregate in larger numbers and in specific locations year after year. Likewise, there are a number of outfitters, air-taxi services, and lodges where one can travel on their own and have good success in creating photos of brown bears.

Some of the very best locations are in Lake Clark National Park, Katmai National Park, McNeil River State Game Sanctuary as well as Kodiak Island. That world-famous, Holy Grail photo of the bear at the waterfalls is done at Brooks falls in Katmai National Park. And it’s so much in demand and so predictable, that one actually has to put their name in a lottery system (a year in advance) in order to get picked to go at certain times. Likewise, the McNeil River State game sanctuary has a similar lottery.

For me, it’s not as exciting photographing with a crowd of people and getting an image the same as many other people already have. For a more personal feel, I prefer less-known locations without man-made structures and organization.

Likewise, I enjoy, along with closeups images of bears, to photograph them in their environment. Where the photo includes the surroundings. Like this image: 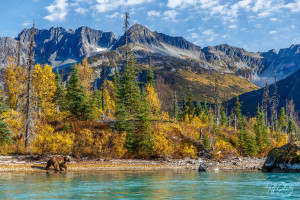 Here is a list of places where one can go on their own to photograph Alaska’s brown bears in both Katmai and Lake Clark National Parks.

Read about the gear I use in my gear closet here.

One of my favorite tours I offer is ALASKA BEARS, GLACIERS AND FALL COLORS PHOTOGRAPHY WORKSHOP & TOUR.

This 7 day/7 night photography workshop & tour travels to several unique Alaska locations including; a pristine, grizzly bear-populated, turquoise-colored lake surrounded by snow-clad mountain peaks with fall colors at their base in Lake Clark National Park. It also includes a helicopter-access only glacier and driving through color-rich valleys flanked by craggy mountains.

This is not just a “tour” but a photo workshop. While in the field and in the several classroom instruction sessions, I will teach you methods I have learned in my 30+ years as a professional photographer to help you take your landscape and wildlife photography to the next level. I am not there to make his own photographs…I am there to ensure you get to make your Alaskan dream shots and to take your photography to the next level. I am currently booking for 2021. If this sounds like the perfect experience for you, let’s chat!