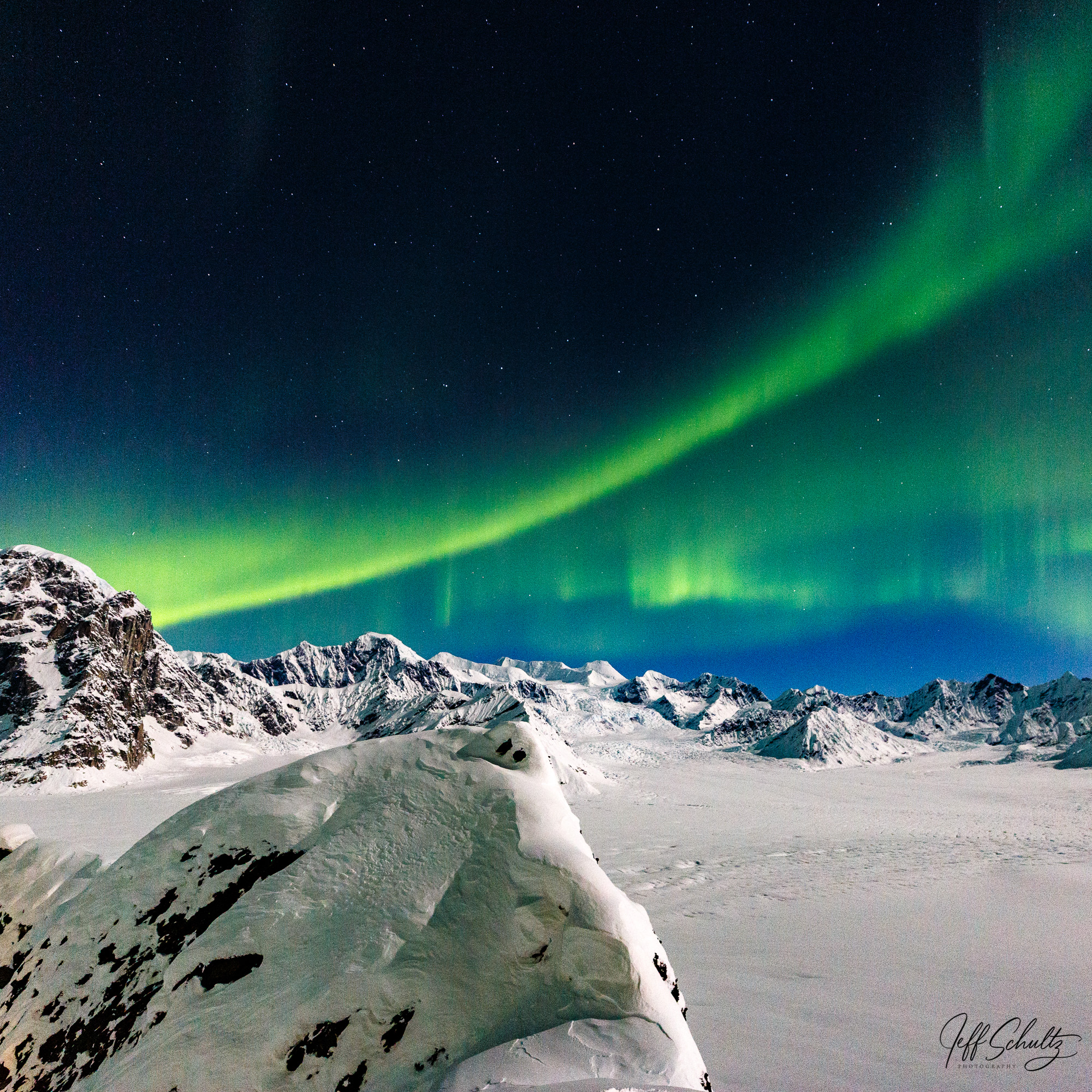 During a full-moon, the Aurora Borealis (aka: Northern Lights) waves across the skies above the Don Sheldon Amphitheater and Ruth Glacier at 5,800 foot level in the Alaska Range. Mt. Dan Beard at 10,082 ft (3,073 m) is on the far left and 13,220 ft (4,030 m) Mt. Silverthrone rises above the cascading icefields to the right.

This image was made when a full moon was rising off to my right at 1:11 am when the Aurora first began to appear. It wasn’t long and the sky exploded with Aurora. Everywhere I looked the lights were dancing in the Sky.

Amphitheatre:  Noun: an oval or round building with tiers of seats around a central open area, as those used in ancient Rome for gladiatorial contests.

The Don Sheldon amphitheater (aka: Ruth Amphitheater) is certainly not a building, and there are no seats, but the “Central Open Area” is, by far, one of THE most absolutely spectacular places I’ve been in Alaska. I first landed by ski plane in the Ruth, affectionately known locally as the “Amp”, with a mountain climbing company in the early 1980s. I fell in love with the place and have been back many times since.

At the head of the nearly 35 mile-long Ruth glacier sits the natural beauty known as the Don Sheldon amphitheater, formerly named the Ruth amphitheater.

The first known humans to venture this far up the Ruth was the infamous climber Frederick Cook and guide in 1906. Others have followed him up this area attempting to refute his claim that he climbed Denali (aka: Mt. McKinley) via this avenue. It wasn’t long and in 1910 Belmore Browne and Hershel Parker came in and indeed found out that Cook’s claim was a hoax. But with all of these intrusions, the word spread about the majesty encircled in The Amp.

It takes an airplane or helicopter to access this location and this is almost always accomplished from the nearby, quaint hamlet known as Talkeetna.

As one approaches the base of the Ruth, the soaring granite quickly envelopes the aircraft from below and above. Most are overcome with the sanctity the view of the Great Gorge has on them as they pick their jaws off the aircraft floor.  5,000-foot walls of snow-smacked granite erect straight up praising the heavens from the frozen ice floor below.

if you know the famous photos of Yosemite National Park and their famous rock walls, Half Dome and El Capitan, the Ruth Gorge is very similar only the glacier is still there and active. And 10 times the impressiveness.

Besides being a mountain climbers paradise with many, many peaks one can climb from just one landing spot, it is also a Nordic skier’s dream. One can ski flat wide open terrain or crazy plummeting descents. It’s absolutely essential that one must have glacial traveling experience with the correct equipment in order to travel in the crevasse prone area.

Some of the photos you’ll see below are from my many different trips into the Ruth. From skiing trips, to photography trips and photo tours.  I made my famous “Igloo” photo in the Ruth. That image was sold over 100 times for commercial purposes.  I  can never get enough of that view.

If you have a chance to stay at either the Don Sheldon Mountain House or the Sheldon chalet which this photo was made from—take advantage of it. www.sheldonchalet.com 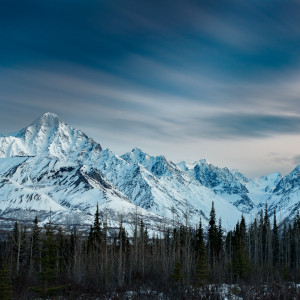