From the Archives: A Once in a Lifetime Photo 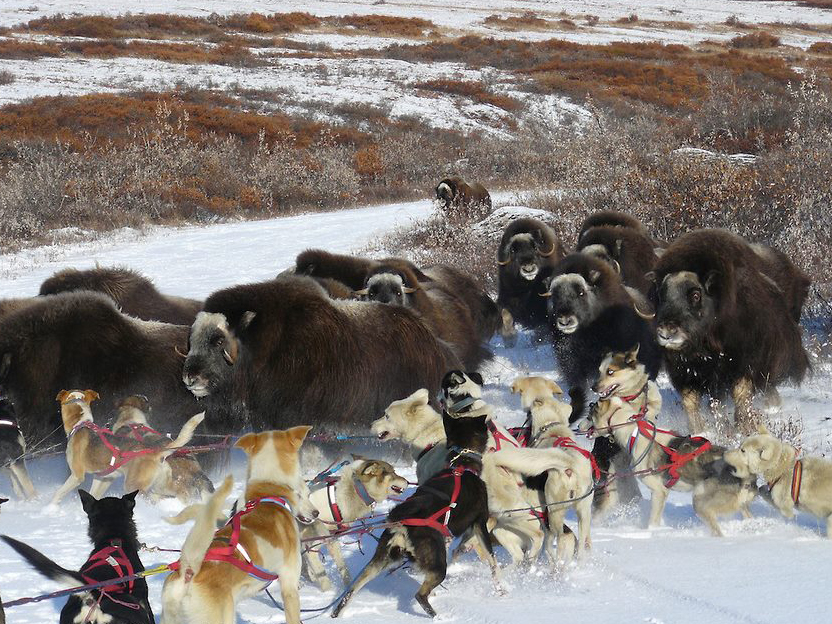 The year was 2007 — my musher friend Melissa Owens was 17 years old and training for her very first Iditarod out of her home in Nome, Alaska. It was October and Melissa and her friend Heather Williams hooked up 23 dogs in front of a pickup truck for what was to be a 30-mile run. (FYI— back in the day Joe Redington Sr started one Iditarod with 21 dogs). Hans Gatt mushes past a welcome sign as he is about to transition from the Bering Sea to Front Street in Nome during Iditarod 2009.

About 1 mile into the run Melissa saw a lone musk ox standing on the left side of the road. She braked the truck and stopped her dogs so the animal could cross to the other side. “Then all of a sudden the bushes came alive, and I think, ohhh, this can’t be good,” Owens says. “There’s more musk ox in there, isn’t there?” There were 16 more muskoxen and they came out of the brush. The two young lead dogs were excited and curious and off they went toward the big group. Heather snapped a couple of photos out the window at what I would call the decisive moment. What a once-in-a-lifetime photo!! Aerial view of a crowd gathered around Matt Calore in the finish chute Nome’s Front Street on Friday afternoon during Iditarod 2008.

Melissa put the truck in park and with the muskox still there, Melissa and Heather began to reel in the dogs. First, 4 wheel dogs were put in the truck and then the two walked into the dogs, got tangled in the gangline, but managed to move the dogs around to the opposite side of the truck, out of sight of the muskox. They turned around and went back. Melissa says;  “While that was a once in a lifetime experience, I hope to never repeat it.”

A couple of weeks later, Melissa contacted me and sent me the photo and asked “what do you think of this? Is there a market for this?” I was running the stock agency, AlaskaStock at the time. I immediately called her and asked, “Are you sure this is a real photo?” She assured me it was VERY real. If it was real, then I knew there would be interest in it. I showed the image to the photo editor at the then, Anchorage Daily News and he said to me: “Are you sure this is a real photo?”. I assured him it was. A couple of days later it was published in the Daily News— we immediately began selling prints of the image from our website. The photo was a hit with many dog lovers, mushing fans, and mushers themselves. Heather enjoyed the checks we sent her way.

Today, Melissa owns and operates Owl Creek Kennel in Knik, AK with her husband, Jason. Check out their kennel and meet their dog team here. 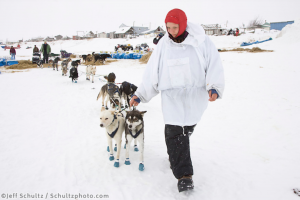 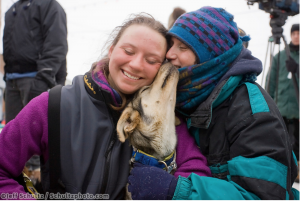 18 year old Melissa Owens of Nome gets a hug from her mom Pat and a kiss from her lead dog Yoda after finishing in 30th place during the 2008 Iditarod Photo by Jeff Schultz/SchultzPhoto.com (C) 2018 ALL RIGHTS RESERVED 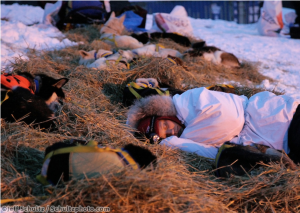 Melissa Owens rests with her dogs at Ruby on Saturday morning Photo by Jeff Schultz/SchultzPhoto.com (C) 2018 ALL RIGHTS RESERVED 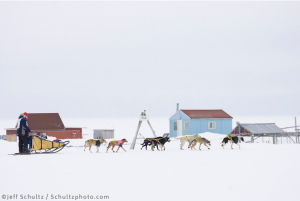 “WELL, I WOULD SAY THE MOST REWARDING EXPERIENCE [ON IDITAROD] IS EVERY TIME I FINISH. ONE OF THE MOST SPECIAL FINISHES WAS WHEN I FINISHED PREGNANT WITH MY DAUGHTER.”


(click on Melissa’s photo to hear her audio responses)

Did you enjoy Melissa’s story? Find hundreds of amazing Iditarod stories in The Faces of Iditarod project. The project showcases just a small sampling of the thousands of selfless people involved, one way or the other, in the Last Great Race on Earth®. Mushers, volunteers, spectators, village residents, and of course the canine athletes. The images were made during pre-race activities as well as all along the 1,049 miles of trail from Anchorage to Nome. Both outdoors and indoors with a studio background and light. They are all on equal footing here. Our hope is that from the images here, which take the subject out of the “Iditarod elements”, combined with their stories (audio & written) and personal info, will show what this thing we call the IDITAROD® really is — an Alaska event of real-life humans and superstar canines that is simply like no other event in the world. Check out the project here, click on any photo, and listen or read their story.